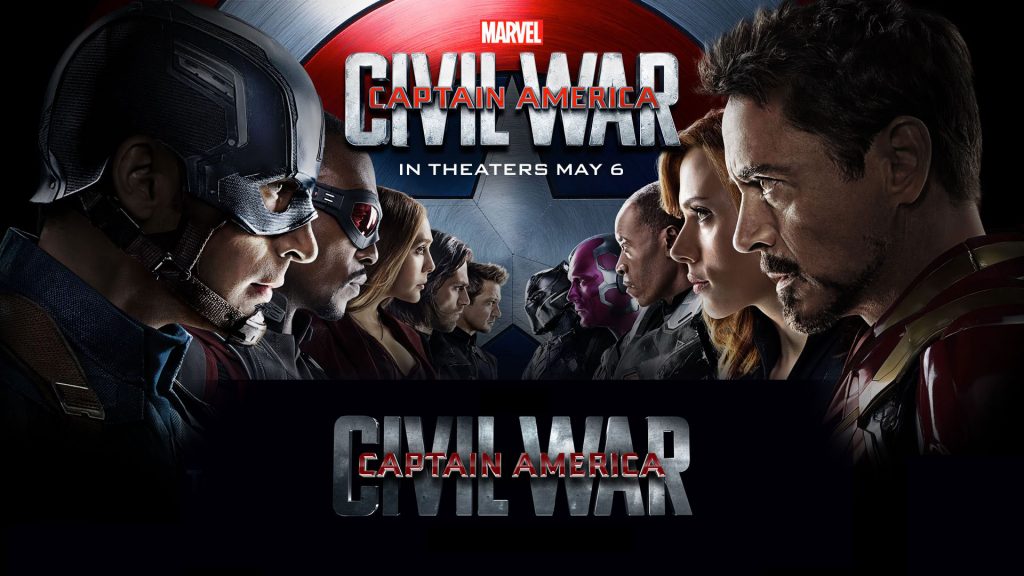 Extremely Spoiler filled review for Captain America 3: All the action figures goes fighty fighty including Spoilers for every superhero movie ever, the Patriot and America History from the years 1861 – 1865

Let me start by saying that I went to public school, so the version of the Civil War that I was taught involved the North & South North Americans (I know, I was confused too) fighting over a bunch of things including taxes, laws and the stuff covered in the music video commercial for Roots that was shown before this film. Apparently, fancy private school educations teach that it was a war between Captain American (played by the Human Torch…they never covered why) and Iron Man (played by kung-fu Sherlock Holmes) and it wasn’t so much a war as much as “Let’s have a super-powered schoolyard fight and then we’ll have a smaller fight later”. If all wars were like this, then it wouldn’t be a big deal and everyone would be fine with going off and fighting, except the one guy who has to get seriously injured for emotional drama.

I’ve been hearing for over a week now that this movie is the best Comic Hero movie ever and as far as superhero films go, I’ll say this one took the prizes for “most heroes on screen at once” and “best live action comic splash page” but it wasn’t without it’s problems. With all of the superhero’s involved in the movie, the majority of the screen time went to those who were the least interesting, except for Black Panther (who was awesome, but does he really need to call himself Black Panther? How many other superheroes named Panther are out there that he needs to differentiate from?). Ant-man (played again by Paul Rudd as Paul Rudd, like there’s anything wrong with that) and Spider-Man (played by one of the best actors to play Spider-Man out of the twelve actors who have played Spider-Man on film in the last 5 years) stole every scene that they were in, which unfortunately was too little. The majority of this film is spent exploring the friendship (sure, they’re just friends, suuuuuuuure) between Captain America and the Winter Soldier/Bucky/Sgt. James Buchanan Barnes/Chris Gaines (played by himself).

The rest of the characters got lost in the shuffle and seemed to serve no purpose side from being there for the big fight, which is halfway through the movie making everything that comes after it seem very anti-climactic. Scarlett Witch, who might have been the most powerful person in the entire film, was resigned to having to stay home and stare out the window wanting to go outside like the girl from Repo: The Genetic Opera. Vision got one scene wear he wears a bad sweater and cooks. Falcon flew around a lot. Black Widow flipped guys by their heads over and over. War Machine…well he was the token stubbed toe and Hawkeye reminded everyone that all he can do is shoot arrows real good and doesn’t really fit.

A lot of people are going to compare this film to “Batman V Superman: Dawn of Action Figures” which is easy to do because it’s kind of the same film but with different but similar plot holes.

*Mad Spoilers to follow, so if you don’t want to know turn back now and go read some other shit*

First off, the main plot in both involved some dude tricking two heroes into going after each other. The big difference is that the villain in this was German and somehow knew about tons of secrets that would have been impossible for him to know about. Also, and unrelated, Zemo is supposed to have a purple trash bag over his head and wear a fur and gold stole around his neck…how hard is that to get right? They didn’t even try!

I’ve heard a lot of people complain about how stupid the “your mom is named Martha? My mom is named Martha too!” resolution of BvS was, but in Civil War it’s the exact opposite and from a lot more people ”You killed my family! It wasn’t your fault? A villain was to blame? Fuck that! It’s your fault!!!!” Everyone in this film, including the main “villain” forgot that the Avengers were stopping some sort of evil plot and just decided that the Avengers were to blame. It’s like they didn’t even see the two Avengers films. What the hell?.

All in all, I enjoyed this flick a lot. It was the movie that Avengers: Age of Spader should have been, but doesn’t take the title of best Super Hero Movie Ever for me…which is currently held by about ten or fifteen different films.

PS – Do you think that they are going to show Spider-Man’s uncle, Joe Pesci, die again in the next Spider-man reboot or will they skip it because it might confuse people that he’s a shape shifter that chose the forms of Joe Pesci, Cliff Robertson and Martin Sheen???

The Snark: Review of X-men: Apocalypse